Grid power is dirty!  It’s polluting the planet!  We should all put solar panels on our roofs, some batteries in the shed, and go off-grid!  For the sake of the children!  Hmmm… Not so fast.

This post is about the electrical grid (“the grid”), why it’s not going to go away, and why (eventually) it will be ‘green‘.  Hard to believe?  Read on. 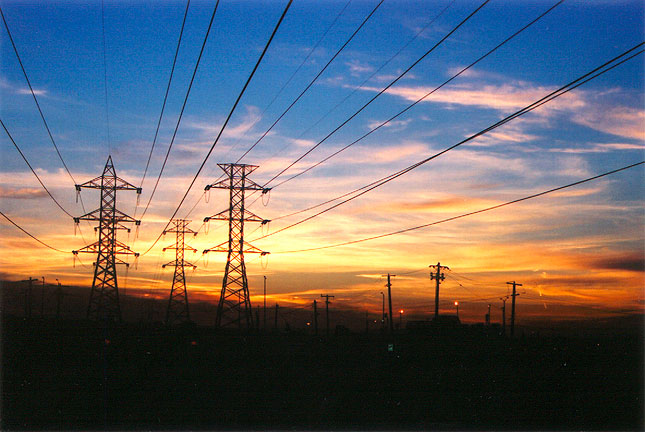 The electrical grid in most developed nations is a reliable way to connect the consumers of electricity to the producers of electricity.  Electricity is generated in various places, by various means (e.g. coal, natural gas, nuclear, hydro), fed into the grid, distributed around the country, and ultimately reaches your house where you flick a switch and power some sort of device.  Fantastic!

One not-so-fantastic aspect is that most of the energy comes from non-renewable, polluting and/or dangerous sources like coal, natural gas and nuclear.

Another not-so-fantastic aspect is that after a month or three a bill arrives to account for your usage.  You must pay that bill in order to remain connected to the grid and enjoy its benefits.  Every bill seems to get larger and larger.  Ever-increasing electrical bills are financially hurting a huge number of people and have pushed many to install solar photovoltaic (PV) panels on their roofs.

Solar PV panels generate electrical power when the sun shines.  The house uses as much of this power as it needs and any surplus is exported to the grid.  When it’s cloudy or dark or your consumption rate is high, the panels don’t generate enough power to meet household needs, so the deficit is imported from the grid.

Yes, this is how ‘net-metering’ works, and things work a bit different for those on ‘gross-metering’ plans, but I’m keeping things simple for now and so will focus on how it works for most folks.

Most folks, naturally, want to minimise their electricity bill as much as possible.  A decade ago PV panels were so expensive that installing enough of them to generate all the power that a house needed was rare — PV arrays tended to be small.  The demand for panels worldwide, however, has pushed the prices down so much in the last decade that they are now quite cheap.  It is now common for folks to install large arrays that generate more power each year than their house actually uses.  That creates a problem.

In order to reduce emissions and “combat climate change” most governments encouraged people to install PV arrays by mandating that electricity suppliers pay customers for the power that their arrays feed back into the grid.  When arrays were small, this wasn’t a problem because all it would do is reduce the size of a bill by a bit.  Now that arrays are large, bills are often zero or even negative (your supplier has to pay you).

Whilst paying customers is great from the customer’s point of view, it is really, really bad from the supplier’s point-of-view.  It costs money to maintain the grid.  As more and more customers install bigger and bigger arrays, and payouts to those customers keep increasing, there is less money left over to maintain the grid.  This results in reduced investment and maintenance (resulting in more brownouts and blackouts) and increased fixed and variable costs in everyone’s bills.  In a very real sense, if you install solar panels on your roof, and receive any money at all for the power you export, you are directly responsible for increasing the size of power bills for everyone.  It’s sad, but true.

One other problem introduced by people installing PV arrays, and feeding surplus power back into the grid, is the mismatch between demand and supply.  If you leave your house to go to work during the day, the amount of power being used by your house is very low, so most of the power generated by your array ends up being surplus and gets exported to the grid.  At night, you come home, prepare dinner, turn on all the lights, the TVs, the AC and your consumption spikes — at the same that time it’s (getting) dark outside and your array is generating very little (if anything at all), forcing you to import the deficit from the grid.

Now expand this to everyone in your time zone.  The sun rises at the same time for all of you, so all of your rooftop arrays are generating surplus power when you are at work and don’t need it, and not generating much at all when you are at home and do need it.  Let’s not even get started on large-scale weather systems moving across regions causing massive fluctuations in PV generation on a minute-by-minute basis.

These things play havoc with the grid and, ultimately, make the grid less efficient, more expensive, and less reliable.  In a nutshell, solar PV arrays are the worst (most disrupting) thing to ever happen to the grid.  Who in their right mind wants to stay connected to a grid that delivers dirty power, keeps getting more expensive, and keeps getting less reliable?  The answer is obvious.

“Grid defections” is a term used by power companies to describe the customers that were once connected (tied) to the grid, but chose to install solar panels, their own electrical storage system (batteries), and then disconnect from the grid completely. Grid defections are on the rise.  Areas with high power prices tend to experience the largest rate of grid defection.

Grid defection is making the problem worse for suppliers.  An electricity bill has a fixed component (often called something like a “connection fee”) which you have to pay regardless of how much power you use.  The other part of the bill is the variable component — this is the amount you pay for the power you actually use.  Unless you have some way of storing the power your array generates (so you can use it at night, for example) then you can’t defect from the grid.  Batteries let you do this, but they have, historically, been quite expensive.  Most folks that are grid-tied don’t have batteries at all — the grid acts as their battery.  Now that companies (like Tesla) are making more and more batteries, it is becoming cheaper and cheaper to add batteries to your PV system.  If you have a big enough array, and a big enough battery bank, it makes little sense to remain connected to the grid and keep paying that fixed component on your bill.  Grid defection becomes the ‘financially logical’ choice.

Folks that defect from the grid no longer contribute anything towards its maintenance costs.  Since the maintenance costs are still the same, but there are fewer people left behind to pick up the tab, all of their bills go up.

The future sounds pretty bleak for the grid, right?  It’s just a matter of time before it collapses under its own weight and dies, right?  The enemies of the evil, dirty grid are probably cheering at the thought.

But here’s the thing…

Electricity suppliers are at a critical fork in the road:  “Business as usual” will result in bankruptcy (because large grid-tied PV arrays and grid defections will ultimately kill their business model).  Adapting to the new reality is their only real choice.  That means coming to terms with, and dealing with lots of solar PV customers and the unavoidable supply/demand mismatch.

Some (perhaps even many) suppliers will cling onto the past, will fail to adapt fast enough, and will go out of business. The remaining suppliers will cannibalise the corpses of those that fall, take their remaining assets and customers, and forge ahead.  Key to survival is solving the supply/demand mismatch (aka ‘load balancing’).

Power companies are already developing ways to store surplus solar PV power until they need it.  Traditional (utility-scale) chemical batteries (like the ones Tesla have in mind) are one way to do this, and pumping water uphill into a big dam when the sun shines and releasing it when the sun doesn’t (pumped hydro) is another.  Whilst pumped hydro is the current leader (with over 168GW of installed capacity worldwide) geographic limitations mean that it can’t be used everywhere, so different solutions will be employed by different power companies in different regions.  As a research field, it’s exploding.

Viable solutions to the load balancing problem already exist and have been implemented.  New solutions are being developed and tested right now.  The problem has already been partially solved.

But here’s the kicker…

All of the leading contenders for grid energy storage are environmentally friendly (or, at least, more environmentally friendly than coal, natural gas, or nuclear).  Pumped hydro, for example, is basically just a dam with a turbine generator and a pump.  Power is generated when water flows out, then surplus solar PV power is used to pump water back.

On a personal level, the more PV panels you install, and the more power you feed back into the grid, the more surplus power will exist, the more opportunities will be created, the faster your region will end up with an environmentally friendly grid energy storage system, and the ‘cleaner’ the electricity that everyone pulls from the grid will be.

Grid energy storage systems are allowing solar to take over from coal, natural gas and nuclear in providing environmentally friendly baseload power for the entire grid.

So, defecting from the grid is something you can do right now to help your wallet and the environment right now.  It won’t help anyone else though.  Staying connected to the grid, installing as many solar panels as possible, and exporting as much power as possible, may not help your wallet quite as much — but you will hasten the rate at which clean grid electricity becomes available, for everyone.

May your days be sunny ones.

PS:  The purpose of this post was not to advocate any one approach.  It was to frame the discussion from a different angle and encourage folks to think about it a bit deeper.  It’s good to challenge assumptions once in a while.  The world keeps changing around us and sometimes those old assumptions are no longer valid.  Unless you re-evaluate the situation every-so-often you may end up walking a long way down a path that is no longer the right one for you.

2 thoughts on “The Future of the Electrical Grid”