Use your iPhone to shoot videos outside?  Don’t notice anything more than a gentle breeze whilst filming?  Shocked to later discover that the audio quality is terrible thanks to wind noise?  Can’t justify spending over $60 for a solution to the problem?  Just want a quick and cheap hack that works?  Read on.

Most iPhone 4 and 4s owners do not know that their phones actually have two microphones (iPhone 5, 5s and 5c have three).  The one on the bottom of the phone is used when you make a phone call or record a voice memo.  When you are shooting video, however, the phone uses a different microphone.

What microphone, you ask?

Look between the iSight camera and the flash on the back of your phone.

If you don’t believe it, grab your phone, start recording some video, and keep talking whilst you use a finger to alternately cover and expose that hole.  When you play back the video you’ll hear for yourself that the audio fades in and out.

Unfortunately, it is really hard to attach any sort of wind screen to those microphones and, even if it wasn’t, most people have cases that would prevent the wind screen from being able to be fitted or working properly.  How do we solve this problem?  We don’t.  We ignore the default mic and work around the problem instead.

The 3.5mm headphone jack on all iPhone 4, 4s, 5, 5s and 5c models is actually a combination headphone and microphone jack that works with the bundled Apple EarPods.  You know, those (usually) white things that got put back in the box because they didn’t fit in your ears properly and were too uncomfortable to wear for any more than 10 minutes at a time.

Now, if you have never used EarPods before, the ‘remote’ is a strip of plastic located on the cable leading to the right earbud. This lets you control volume, skip tracks, answer incoming calls — that sort of thing.  On the back of the remote is a small hole covered by a perforated screen.  This is the microphone we are going to use.

At this point, a small number of you are thinking “That mic is garbage, this’ll never work.”  Well, you’re half right.  The mic on the remote is garbage.  More accurately, the placement of the mic on the remote is garbage and the location of the remote is also garbage.  If you’ve ever used it to call someone they will quietly hate you for it.  If you’ve ever had it connected whilst shooting video not only will you have noticed that it picks up even more wind noise than the default video mic, but suffers from additional audio artefacts as well.  It really is quite awful.  But we can fix that.

You should now have nothing but the microphone (on the back of the remote) connected by a single wire to the plug. 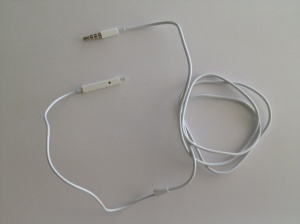 Now go hunt down a small piece of soft, spongy foam.  It could be from some electronics packaging, a jewellery box, a dish sponge… mine came from a $2 set of disposable foam paint brushes.

Cut out a 2cm x 2cm x 6cm long piece if you can.  Wider and deeper would/could be better, but it doesn’t need to be any longer than 6cm.  Bevel any and all foam edges so that no 90° corners remain.

Get a small screwdriver, or a large nail, or something similar, and carefully ‘drill’ a pilot hole right through the middle of the long axis.  Try to keep it as centred as you can along the whole length. 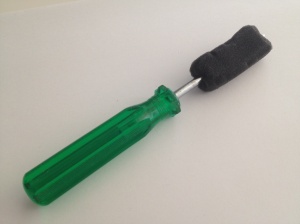 Now force feed the microphone into the pilot hole deep enough so that it is centred length-wise in the middle of the foam block.  The microphone now has a wind screen.

The final step is to coil all of the cable into a tight bundle around 2 or 3 fingers.  Then grab a cable tie, rubber band, or similar, and tie up the bundle.

Insert the 3.5mm microphone plug into the iPhone’s ‘headphone’ jack and start recording.

Because they are recessed into a flat surface.  Any time wind hits any flat surface it is forced to deflect and run along that surface.  If wind, travelling along a flat surface, passes over a ‘hole’ in that surface, some of the wind will swirl into that hole (much like an eddy current behind a log or stone on the edge of a stream).  The turbulence in the hole carries much more (kinetic) energy than regular sound waves, and ‘wind noise’ is the result.

This phenomena is not limited to iPhones.  Every microphone in the world that is mounted into a flat surface and exposed to wind will suffer the same problem.

Why doesn’t the EarPod microphone work well when used ‘normally’?

The normal position for the microphone is against or near clothing.  Wind striking the clothing will create turbulence which, even if the mic was facing towards the body, would be picked up and register as wind noise.  Every time the remote or the attached cable rubs against clothing, vibrations will travel to the mic and cause even more audio artefacts to be recorded.  There is almost no conceivable way that this arrangement will ever work without the audio quality suffering in one way or the other.

Do I have to cut off the earbuds?  Seems like a waste.

If you don’t then you’ll have big, plastic earbuds clanking into each other in the wind.  Threading the microphone into the pilot hole will also be more difficult.

Wouldn’t it be better to tape the finished mic to the front of the phone?

The trick to eliminating wind noise is to convert kinetic energy from the wind into some other harmless form of energy before it reaches the microphone.  The foam has lots of tiny, spherical cavities or ‘pockets’ on its surface.  Moving air molecules enter these pockets and bounce against the walls.  Every time they bounce kinetic energy is transferred from the air to the foam and is (ultimately) converted to heat.  This is good enough to absorb the energy of low-speed winds.

If the microphone is allowed to dangle loosely below the phone then high-speed winds, which are too strong to be absorbed by the cavities, will have (at least some of) their kinetic energy converted (via torque) to rotational motion — the mic will spin slightly and sway in the wind.  Following winds will then tend to slip past the mic in its new position, rather than slam into it (like the behaviour of wind against the rudder on a plane).  A loose mic thus has two ways to absorbing or avoiding wind energy whilst a rigid, fixed mic only has one.  Car suspension systems typically have two systems (shock absorbers and springs) for the same reason.

Taping the mic to the phone prevents it from swaying or spinning and thus you have no way of absorbing or avoiding high-speed winds.  Taping it to a flat surface also results in more turbulence from deflected wind (as explained earlier) so you actually end up with even more wind noise.  Try it and see.

What was the point of bevelling the edges of the foam?

It is better to dodge wind than to absorb it.  A square is 41% longer corner-to-corner than it is face-to-face.  Winds heading towards the mic at any angle other than a right angle will therefore be presented with a bigger target.  Bigger targets are easier to hit.  More air molecules will strike the wind screen.  More energy will need to be absorbed.  There will be a greater chance of hearing wind noise.

By bevelling the 90° corners into, say, 45° corners, you reduce the size of the target when viewed at an angle.  A smaller target will get hit by fewer air molecules.  Less energy will need to be absorbed.  There will be less chance of hearing wind noise.

Ideally, the shape of the wind screen would be a cylinder, with no corners at all.  Its ends would be rounded.  It would look like a large pill — streamlined.

I followed all of the instructions but now I’m not getting any sound at all!

Do you still have the microphone plugged in?  You didn’t modify the plug, so the phone still thinks a pair of headphones is connected.  When you play back a video you won’t hear anything because the audio is being sent down wires to earbuds which are no longer there (probably in the bin by now).  Unplug the microphone to hear the audio.

I’m not hearing wind noise, but do get random audio artefacts.  What’s with that?

If the swaying microphone hits anything (like, say, your clothes or your wrist) then the kinetic energy from the collision will travel through the wind screen, transform into a pressure wave, hit the mic, and manifest as a loud artefact in the audio track.  You probably won’t notice the collision (especially if it just bumps into your clothes) because the mic is so very, very light.

Modify your grasp and technique to minimise or eliminate such collisions.

e.g. On an iPhone 4 or 4s, the jack is on the top-left.  When recording video, you’re usually in landscape mode.  The record button is therefore on the right-hand side of the screen.  You can simply hold the phone with just your right hand and tap the record button with your right thumb.  Since nothing is ever anywhere near the left hand side of the phone (where the mic is swinging freely) you’ll never have a collision and never suffer from audio artefacts.