Live in Australia and have an old, crusty phone socket that needs to be upgraded?  Not sure if you can DIY or whether you should call a sparky?  If so, read on.

Telecom/Telstra has installed millions of 600-series phone sockets in houses all across Australia since the 1960s.  If you have one, it probably looks something like this:

If you’ve bought a phone recently, however, the chances are it no longer has a 600-series plug.  It probably has an RJ11, RJ12 or RJ45 plug instead — something like this:

So, what you probably want to do is upgrade your old phone socket to one that will suit your new phone’s plug — something like this:

Whilst there are a lot of possible combinations of old sockets, wires and new socket options, I’m going to explain the simplest case so that you can grasp the bare essentials of what is involved.  If you are still confused at the end, keep researching or call an electrician.

If you remove the cover plate of the old (600-series) phone socket, you will see six screw terminals attached to six connectors arranged in pairs.

Each screw/connector should be numbered (from 1–6) but, if they aren’t, just start your numbering from the outermost connector in the group of four.  Thus you should have 1&2 then 3&4 then a gap (to receive the non-conducting spigot) followed by 5&6.

For a single, regular, no-frills phone line that’s all you need — one pair of copper wires.

NB:  These wires usually have ~50V DC open circuit which jumps to ~100V AC when a call comes in.  Shorting or earthing them can give you a nasty zap or damage expensive equipment at the exchange which can easily be traced back to you.  If you aren’t competent to handle such live wires without causing damage, don’t proceed — call an electrician instead.

Remove the mounting screws holding the socket’s mounting-plate to the wall.  Carefully pull the plate out so you can check the back for any surprises.

Using an insulated screwdriver, release the white wire from terminal 2.  Snip the exposed/stripped section of wire off with insulated cutters to minimise the chance of an accidental shock or short.  Carefully withdraw it from the socket.  Bend the wire out of the way and tape it for extra safety if you wish.

Using an insulated screwdriver, release the blue wire from terminal 6.  Snip the exposed/stripped section of wire off with insulated cutters to minimise the chance of an accidental shock or short.  Carefully withdraw it from the socket.  Bend the wire out of the way and tape it for extra safety if you wish.

Dispose of the 600-series socket and mounting–plate.  Keep the mounting screws.

Now let’s turn our attention to the replacement socket.

The simplest Registered Jack (RJ) that will support a single phone line (pair of wires) is the RJ11.  The RJ11 has 6 Positions where wires can be inserted and connected to pins, but only 2 Contacts have actually been made — thus RJ11 is also known as a 6P2C connector.

NB:  Your phone may have an RJ12 plug.  This is exactly the same size and shape as the RJ11 but instead of only 2 Contacts it may have 4 Contacts — thus RJ12 is also known as a 6P4C connector.

All you need for a basic phone service (which fully supports ADSL in both its normal and naked forms) are two copper wires, so a 6P2C RJ11 socket is all you need.  If you can, get one.  But since it costs a negligible amount more for manufacturers to make 6P4C RJ12 sockets (which get used a lot by companies) it will probably be easier to find and use one of those instead.  Something like this would work just fine:

The back of the socket will have colour-coded slots for wires.  You run each wire through the channel in the middle, then through the same-coloured slot.

NB:  You should easily find the blue slot, but you will not find a plain white slot.  Look for a white-blue slot (often a rectangle or square split diagonally with white in one half and blue in the other) — the white and blue striped wire goes in the white-blue slot.

In each slot are two small conducting blades.  If you push the wire down to the bottom of the slot, the blades will cut through the sides of the sheath and make contact with the bare metal inside.  To help you with this process you may want to get yourself a punch down tool — something like this: 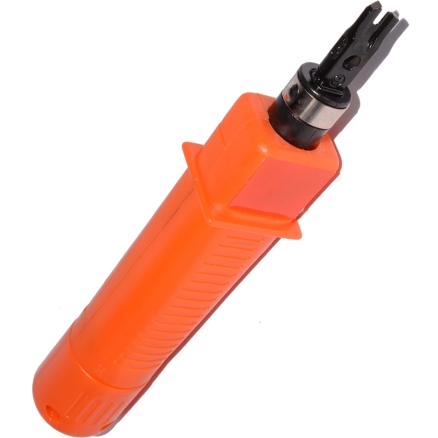 A punch-down tool is not required — you can easily accomplish the task with one or two thin screwdrivers, a pair of scissors/clippers, and by exercising a bit of care and patience. However, given that punch-down tools can be found for ridiculously low prices on eBay (e.g. $1.61 from Hong Kong with free international shipping) why not buy the tool and make your life easier?  Especially if you have more than one socket to replace, or know other people that have sockets that could do with replacing down the track?

Using a punch down tool (or otherwise) punch the white(-blue) and blue wires down into the correct positions on the RJ11/12 socket:

Once you have punched down the white(-blue) and blue wires it should look something like this (but with the loose ends trimmed off): 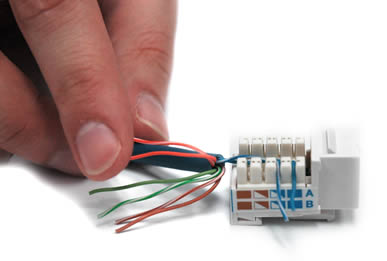 Two wires punched down into their corresponding slots on the back of a RJ11/12 socket with all of the other wires folded out of the way (not punched into the socket).

Secure the unused wires with electrical tape, cap the back of the socket (if it has a cap) and then plug your phone into the socket and test to make sure it works.

If everything is working then push the socket into its mounting-plate and mount it on the wall using the original screws that you saved.

Tidy up and you’re done.

PS:  Assuming that you buy a RJ11/12 socket, mounting plate and punch down tool, you’re still going to have change left over from $30 and should be able to complete the above process in less than half-an-hour.  Each additional socket would cost you less than $20 (since you now have a punch down tool you would only need to buy the socket and plate) and would only take about 10 minutes to upgrade.  A sparky would charge around $80 per socket.